Smriti Irani wanted to whack her daughter for an eyeroll. This is how it ended

Smriti Irani is like every other desi mother on the block and her recent picture with her daughter is proof of the same. Smriti recently shared an image of herself along with her daughter Zoish Irani on the photo-sharing platform Instagram.

And believe us when we say this, the Textile Minister’s caption for the image will surely remind you of your own mother.

The caption said, “That irresistible urge to whack your kid every time she rolls her eyes but can’t …so you end up smiling #teenagetantrums #siyapa” is giving feels to all fans of the actor-turned-politician.

Smriti Irani became a household name after she starred in Kyunki Saas Bhi Kabhi Bahu Thi as Tulsi, the show ruled the TV screens of India for eight long years.

The 42-year-old’s sweet image with her 15-year-old daughter has the internet in splits. The comments on the image took some Instagram users back to Tulsi Virani’s Kyuki days.

One Instagram user jokingly wrote on the post, “Ma’am remember the whacks you used to give in Kyunki with your dhai kilo ka haath?”

Here are the best reactions: 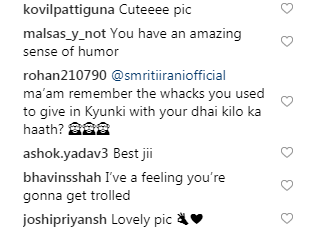 Another tidbit: The BJP politician was a participant in the beauty pageant Miss India 1998, but did not make it to the top 9.

Over the past few years, Smriti Irani has got her own band of followers on social media for her humorous posts.

Kangana Ranaut set to direct her own biopic—Details inside

At Soundarya Rajinikanth’s Wedding, Kajol Was The VIP Guest

Smriti Irani wanted to whack her daughter for an eyeroll. This is how it ended

while thanking for giving mails regarding actions to be taken in compliance to the notices issued by IT dept, it would be helpful , if sms alerts are geven regarding notices to whom issued particularly.with regards.

I know how to see the Pf balance.but I dont know how to do kyc.i work in raipur chhattisgarh but my head office is in delhi.and i 6 month ago I left my job.so what is the procedure to withdrawal my pf.from other state.please help me